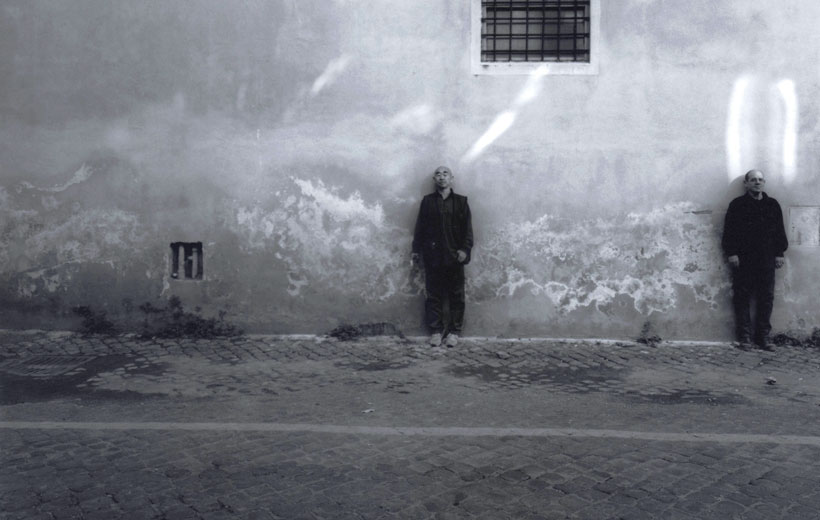 “Proceeding walking backwards so as to not lose sight of the path covered. At each step the view widens and new signs are brought into play”: this is the conceptual base of an artistic research that has become a way of thinking, a life-philosophy, a style of doing. As Renzogallo explains, the conventional way of walking forward leads to the inevitable deletion of the path covered; the moments of life just passed are behind you, invisible to the eye, delicately preserved in the illusory places of the memory. Walking backwards allows one to retain within the visual field what has been done. Life’s work remains well placed along the way, available to be for ever compared, to be retraced again, to be followed along parallel tracks, providing elements for comparisons, re-inventions and evolutions. In walking forwards the field of vision is restricted by the very sight of the target; when going backwards, both perspective and view are widened for the very fact that the point of arrival is unknown. In one of the many cycles of Renzogallo’s work – “Odyseeus”, dating from the ‘80s – the central theme of the “voyage” corroborates the pivotal importance of walking as a device towards the expansion and the development of a story; by the same token, the final goal is pushed into the background, a mere sign at the end of the tale.

When exhibiting his work, Renzogallo tends to retrace his entire artistic history, thus including his latest achievements as well as what will be or could be. The works are chosen and brought together in order to highlight the evolution that each one carries with it, as well as their respective links, all this through a process that is at the same time linear, transversal and inverse. His works all relate to each other and they all revisit each other. The global picture of their shared paths allows one to retrace the creative logic at the origin of every phase. Thus emerges an interactive relationship between the viewer and the work of art. While following the story set by the artist, the viewer is free to invent his own way of organising forms, of adding ideas and sensations, selecting time after time a personal point of view. Far from forcing onto the viewer one and only interpretation of his work, the artist suggests different readings, thus enabling the spectator to freely choose his own way to Art, to focus on that unique target for a correct interpretation and reach an unequivocal solution.

His work proceeds by “cycles”. Each of them represents a particular moment in the artist’s voyage. One fundamental cycle is “Bersagli”, dating from the 90’s, where the body, in its physicality, become central to the creative process. Gesture and action are infused into the work, as in “Mirare al bersaglio che ti sta mirando” (Aim at the target that is aiming at you) in the Macro Museum collection in Rome. Inevitably, throughout the whole evolution of a piece, from conception to creation, a mental, but also a physical subjectivity become part of the object itself in the same way as indelible signs will remain in the body and in the spirit of the artist who has shaped that object.

In every one of his works the artist proposes a kind of spiritual journey through his aesthetic research. An example is “Tracce” (Traces), an installation realised for the Volume Foundation of Rome in 2000 in the two-men show with Hidetoshi Nagasawa, in which nothing is certain or definite, but everything  is possible and interchangeable. This concept is particularly evident in one of his latest cycles, that of “Anfore” (Amphorae). The sacred element inherent to what is one of the earliest man-made forms, is accentuated by the glow of white light characteristic of the work “Diario” (Diary), a vase made of torn paper, imprisoned in an enormous iron cage that confirms its inaccessibility.  A wire mesh gives shape, instead, to a black amphora, no longer a container, having now given way to the concept of pure form. Form, however, is also content, according to Eastern culture that is present in all of Renzogallo’s work. The enclosed amphora, protected and surrounded by a halo of magic and mystery, leads back to Pandora’s Vase, a symbol of the divine gift, transformed, in the book of Genesis, in the Tree of Paradise a gift soon revealed to be a curse to humanity that will end up by eating its fruit.

It is no coincidence that the cycle preceding “Odysseus” is that of “Porte del Paradiso” (Doors of Paradise), inspired by the works of William Blake. All of Renzogallo’s work is a continuous veiling, unveiling and revealing, where the surfaces move freely in multiple layers of diverse materials that contrast in colour, consistency, quality and form. Out of layers of veils, clay, grilles, copper foil and paper, a silhouette emerges. The visitor is stirred to a continual digging and searching for the form lying underneath, often un-grateful, masked and barely recognisable through a kind of criss-cross of lines barely perceptible to the human eye. The amphora itself reappears, now broken into fragments of truth in need of reconstruction.

From the Vase comes the spark that ignites the desire to unleash artistic expression in wide open spaces so as to open up to the world. It is a desire that finds fulfilment in the environmental pieces to which Renzogallo has worked since the mid-seventies. They are true and proper stories told in materials that shape themselves in harmony with the surrounding environment, such as the installation dedicated to the character of Antoine de Saint-Exupéry, where traces scattered all over the Comune of Caiazzo allow students to follow and reconstruct the story of The Little Prince.

The same sense of momentum can be seen in “345o Nord”, a large environmental work realised for the Art-Nature Biennale in the Park of Maiella in the Val di Sangro. A brass step with 345o Nord written on it, leads to a long, “walkable” axis of Carrara marble, suspended 14 metres in the air. At its centre is a brass furrow immersed in red raisin, projected straight towards Maiella, at the limits of which is a one-seat cube made of the same marble, an invitation to meditation and silence that releases nevertheless a liberating feeling of flying. Underneath it all a tank with a black granite edge contains large river pebbles painted in red lacquer. Its exterior is painted dark green like the surrounding nature. The work, therefore, is in harmony with the environment while the visual impact of the whole remains intact. It adapts itself to the countryside, in the same way as the area reinvents itself in harmony with the work; to this end even the hill has been shaped so as to remove any obstacles or visual distractions in the area below. Work, nature and man are here one thing only. A promise of future charm can already be detected in a project prepared for the University of Tuscia’s Campus, where the artist reinstates the link between work of art, man and environment using for his installation stones such a travertine and peperino and metals such as iron. Here, in contrast to the work previously described, the crucial theme is “the meeting”: four walkways plus one of access across the campus intersect one another freely and come together at a “meeting point” where the students can confront themselves along the way as well as in a future for them to cross into.

The use of heterogeneous materials is a constant in Renzogallo’s work; elements of a diverse size and nature, placed side by side but also opposed one to the other, not only create a form of synergy but are also symbolic images of a concept. More than a representation, that of Renzogallo is a contest with the elements of reality. He defies the laws of physics so as to reveal the paradoxical nature of all that is incidental, he studies the material and experiments with it, forcing it to its extreme possibilities and drawing out of it its most intimate plastic potential – for eventually denying it all. In the “Mare” (Sea) installation of 1990 at the Epikentro Art Centre of Patrasso and in Athens, an enormous sheet of glass, set in a cage of metal mesh, is suspended by very fine steel wires hanging from the ceiling. The shadow projected produces a magical effect of small sea waves floating around the room and a slight effect of extremely heavy floating materials displaces the observer who is no longer able to identify, at first glance, the real characteristics of the elements used: the solid becomes liquid and the weighty becomes light. In a certain sense, in Renzogallo’s work it is precisely the material that is decontextualised and repositioned so as to create new situations and effects that are not only foreign to the material itself but in fact, quite their opposite.